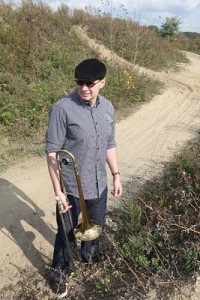 The poodcast/syndication edit for this week’s Revenge of the 80s is up and available at the bottom of this post. This week, we welcome Trombonist “Big Jim” Paterson of Dexy’s as our guest. We will talk about the re-formed band’s touring plans for 2013 (might U.S. dates be in the works?), their latest album, One Day I’m Going to Soar, the series of events that led Paterson to become one of music history’s most prolific trombone players, the value of a good horn section and more. Our conversation leads off hour 2 of the show.

In addition to playing with Dexy’s again, Paterson is also in the group G.I. Blythe, led by Dexy’s co-founder Geoff Blythe.

We also play a new track from Linda Jo Rizzo‘s 2012 Day of the Light album, a Dexy’s tribute song from ska musician Andy Keys Clark and classics by Toyah, REM, Mental As Anything, Trio, The Tom Tom Club, Wall of Voodoo and more.