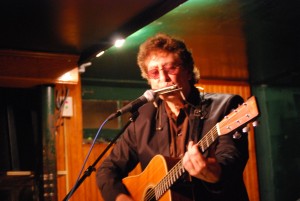 It would be agreeable to many that an historic village with a hand-cranked draw bridge and home of the Erie Railroad’s famed “last stop,” where World War II soldiers would be deployed to Europe would be an appropriate place for master storyteller Stan Ridgway to display his craft. On May 5th, 2011, for the first time, Ridgway and his fans converged at the rustic, yet cozy Turning Point Cafe, which provided a fitting intimate salloon atmosphere for his brand of new wave Americana as the band continued the Eastern U.S. leg of their tour.

Ridgway and the band thoughtfully mixed the play list, which spanned his career from his time as the voice of Wall of Voodoo to his recently-released Neon Mirage album. They began with the new “Scavenger Hunt,” then played Voodoo’s “Tomorrow” and one of his 80s solo hits, “Lonely Town” to lead off the set, which also included an acoustic version of Ridgway’s first international hit, “Camoflauge” and what was to become WOV’s signature cut, “Mexican Radio.”

Stan Ridgway’s presence on stage is like that of a classic crooner crossed with a scoutmaster who tells scary stories at a campfire. Although the tales are compelling enough when listening to his music on a CD, Ridgway’s stance, movements and facial expressions add a more eerie dimension to his story-songs to the extent where fans — who already know the lyrics — are still staring in anticipation of what happens next.

Read more on our Examiner.com page..