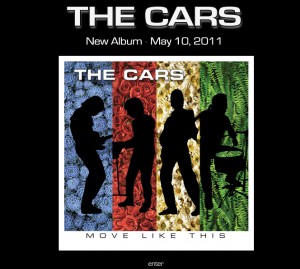 Proving rumors of a new album to be true, original Cars members Ric Ocasek, Eliot Easton, Greg Hawkes and David Robinson (Benjamin Orr died as the result of cancer in 2000) release Move Like This, their first new album since their 1988 breakup.

Move Like This is less reminiscent of their more pop-oriented work from Heartbeat City and afterward, but more of a throwback to the band’s late 70s/early 80s raw Boston new wave sound. Thus us quickly evident in the album’s first track, “Blue Tip,” a funky-ish commentary on wannabes, conformity and current style fads “Well, keep your hat on backward and keep your lips tucked in/the world is full of quackers, and belly button rings.”

Part of what made The Cars special to their fans has been their ability to write and perform catchy tunes that switch from being synth-dominant and guitar-oriented, yet somehow keeping a consistent sound recognizable to music listeners as their own.. It would also seem that, by design, the band purposely triggers memories of past hits with the intros to some of the tracks: on example is the initial guitar riff in “Sad Song,” which sounds a lot like the intro to “My Best Friend’s Girl.”


Continue reading on Examiner.com CD Review: The Cars stay true to their original sound with Move Like This – National Alternative Music | Examiner.com http://www.examiner.com/alternative-music-in-national/cd-review-the-cars-stay-true-to-their-original-sound-with-move-like-this-review#ixzz1OtMYMF00