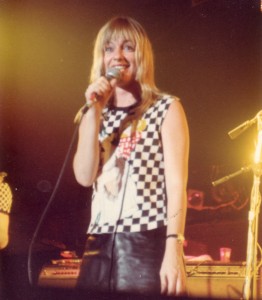 A documentary on the life of Boston-area New Waver

Robin Lane is in the works as its producer kicks off a Kickstarter fund-rasing campaign to finance the project. "Robin Lane: A Woman's Voice." will chronicle the alt-rocker's life while going in-depth on her work with women and youth who are survivors of abuse and trauma.

Having been influenced by growing up in Topanga Canyon in the 1960s, Lane moved eastward and soon immersed herself in the Boston punk scene, becoming a sensation with the new sound as she formed the band Robin Lane and the Chartbusters. Their hits include "When Things Go Wrong" and "Why Do You Tell Lies?" The documentary will include concert footage, interviews, rare photos and home movies from the 1950s.