Our 8/5 show with Julie Brown podcast edit is up 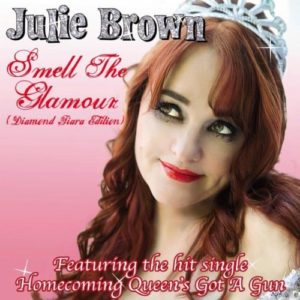 The podcast edit for our 8/5/11 Revenge of the 80s Radio show is up and available at the bottom of this post. Comedienne, actress, writer and singer Julie Brown is our guest this week. Julie just released her new album, Smell the Glamour, the Diamond Tierra Edition, her first full collection in quite a while. It features new tracks “Big Clown Pants,” “Another Drunk Chick” and “Angelina’s Lips” plus re-mixes of the classics “The Homecoming Queen’s Got a Gun,” “Cause I’m a Blonde” and “Vague.” She also created and starred in the movie “Earth Girls Are Easy” and the TV show Strip Mall. Julie has a recurring guest role in the hit ABC comedy series The Middle. Our conversation leads off the second hour of the show.

during our conversation, Julie and I talk about:

We also play classics from Nikki and the Corvettes, Voice of the Beehive, INXS, Vivien Goldman, The Hoodoo Gurus e and more.