Our Revenge of the 80s Radio show is counting down the Top 50 Classic Alternative Cover Songs. The explanation and criteria can be found here in part one of our series. Here are #s 11-20: 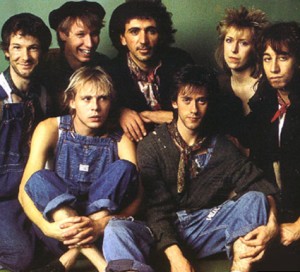 Only Kevin Rowland could add extra swing to this rousing Van Morrison track with his distinct and energetic vocal style. This song was also the last bridge that connected the original “Rock and Soul” sound of Dexy’s Midnight Runners with a standout brass section to the more string-oriented incarnation the band became as it seemingly made the transformation within the 1982 Too-Rye-Ay album. They turned in a memorable performance of the song on The Young Ones’ “Bomb” episode. Dexy’s dissolved after their 1985 release, Don’t Stand Me Down. Attempts to reunite the band fizzled save for a 1993 one-off and a Rowland-led new lineup in 2003 that lasted for a short time. Most ex-Runners wound up as well-sought-after musicians as Rowland fought off drug addiction to re-establish his career. Side note: Dexy’s Trombone player “Big Jim” Patterson belted a superb solo on Paul Young’s hit cover of “Love of the Common People.”
Advertisement

This cover became an international hit for Animotion only one year after Holly Knight and Michael Des Barres recorded the original. For their heavy synth-power-pop sound, Animotion will always be remembered for this track and have, by some not-so-astute radio programmers, been considered a one-hit wonder even thought their follow-up, “Let Him Go,” cracked the Top 40 and “Room To Move” hit #9 in 1989. While the original was quite good, it received very little airplay. It is most likely that Animotion’s theme-costumed video propelled the cut into the top 10 thanks to it earning the band a heavy rotation on MTV.