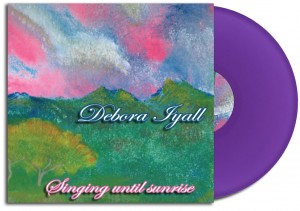 Debora Iyall is planning to release a 12″ vinyl EP and fans will have the opportunity to help make it happen. Iyall, best known as the front-woman for Romeo Void, initiated a Kickstarter campaign to financially support the endeavor. She is offering those who donate to the record rewards ranging from and autographed poster to a dinner for two with the iconic singer.

In Singing Until Sunrise Iyall will be accompanied by her new band, with whom she plays in the San Francisco Bay area. It will be available in purple vinyl with cover art created by Iyall, who says she is for a mid-to-late November release. The tracks will also be available via digital download.

On the EP will be a new, jazz-rock hybrid version of the Romeo Void classic “A Girl In Trouble (Is a Temporary Thing),” which features more prominent guitar, drums and piano and a new third verse written by Iyall. She will also include two tracks from her 2010 Stay Strong CD and one written and produced by fellow RV founder Frank Zincavage titled “Lettnig Go.” Of that track, Iyall says “It’s kind of [a] chill room electronica song of summer… dedicated to our late soundman, Louie Beeson, rest in peace.”

Iyall says she was inspired to try Kickstarter by another San Francisco musician who used the site when he needed a tour bus. Recently, producer and musician Tim Jackson successfully funded an upcoming documentary on Robin Lane taking that approach.

Donations can be made to Debora Iyall’s Kickstarter campaign here until October 21st. You can listen to a clip of Iyall’s new version of “A Girl In Trouble (Is a Temporary Thing) below; she will discuss Singing Until Sunrise and Kickstarter on the program this coming week.