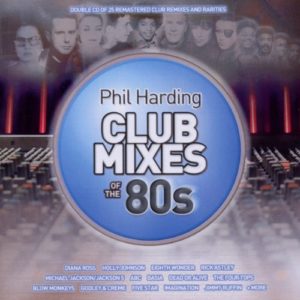 Renowned hit-maker of the 1980s Phil Harding is making available a collection of some of his best remixes from his days with PWL Records. The 2 CD set, Phil Harding Club Mixes of the 1980s, features a variety of classic productions and some previously unreleased material.

Harding, well known for his work in combining new sounds with his own pop-minded acumen throughout his days with Marquee Studios and PWL, highlights his work with artists ranging from ABC to Oxygen to The Blow Monkeys to Rick Astley in Club Mixes of the 1980s,. Never-before-released tracks include mixes done for Jimmy Ruffin, Sinitta and Astley; the collection also features the Murder Mix of Dead or Aliveâ€™s â€œYou Spin Me Round (Like a Record)â€ from its studio master original.

In addition the mix compilation, an expanded version of Hardingâ€™s book, PWL From the Factory Floor, is available and he recently released an album featuring his own vocals, The Story of Beginners. Harding discusses these endeavors in an interview set to be broadcast on the Revenge of the 80s Radio show beginning January 27th, 2012. During the conversation, Harding says he hopes to put together a second set of 80s remixes