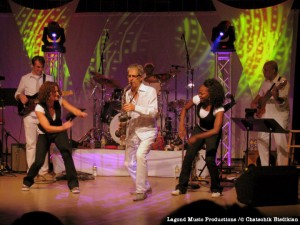 One of classic alternative musicâ€™s top brass men, Charlie Lagond, is celebrating a big milestone for his non-profit music school. Members of the band for which he led the horn section, Kid Creole and the Coconuts, and several other top musicians will be on hand to help celebrate the 10th year of his Lagond School of Music with special fundraising webcast.

The Lagond-a-Thon will run live on Friday night, February 10th, 7-11pm Eastern Time on the schoolâ€™s website, Lagondmusic.org. It will also be available there on-demand after the air date. The show will feature several student performers from the school and appearances by August â€œKid Creoleâ€ Darnell, Coati Mundi, Adriana Kaegi, George Benson, Bongo Eddie, Oz Noy, Will Lee and members of the Blues Brothers Band. Throughout the program, Mundi will interview several graduates, talking with them about how their lives were positively affected while attending the Lagond School of Music.

Because its curriculum focuses greatly on public performance and preparing enrollees to further their education, The Lagond School of Music has an extraordinary track record of success: they have a 100% college admissions rate, with two-thirds of their students earning $1.8 million in scholarships. Many of Logondâ€™s pupils are admitted into top universitiesâ€™ music programs.

The Lagond School of Music also serves aspiring musicians with special needs. â€œThe special needs programâ€™s band really warms my heart,â€ says Kaegi, Co-Founder of Kid Creole and the Coconuts, who volunteers her talents to teach at the school. Kaegi says the group of strong-hearted youngsters will perform two songs during the Lagond-a-Thon webcast.