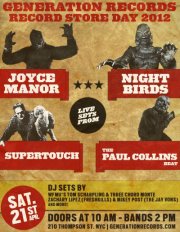 Paul Collins, “The King of Power Pop,”Â will headline an all-day Record Store Day event at Generation Records on Thompson Street in New York City on Saturday, April 21. It will be the fourth annual celebration of independent record stores at the Greenwich Vilage landmark.

Collins, a passionate supporter of Power Pop, DIY music and record stores, will anchor a line-up of Power-Pop heavyweights from the New York-Metro area including Supertouch, Joyce Manor and Night BirdsÂ plus a host of prominent alt-music DJs.

Generation Records will open up at 10am, and the first DJ will promptly spin new and classic power pop, garage punk and DIY rock tracks. There will be memorabilia and special items available as well, including 60 limited-edition pressings of Supertouchâ€™s new single, â€œLost My Way,â€ according to the storeâ€™s event website.

The Record Store Day performance schedule for Saturday is:

Collins, co-founder of The Nerves, The Breakaways and Founder of The Beat, also recently announced dates for a mini-tour of Australia in May.