Two weeks ago, we featured singer Maryam Zadeh on Revenge of the 80s. Here is our Examiner article on her: 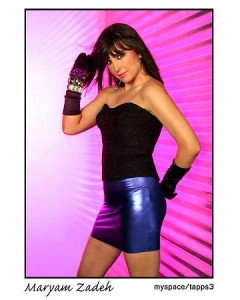 It did not take long for Tapps founder and producer Allan Coelho to become intrigued by the stunning sound of songstress Maryam Zadeh. After the two were working together on a music project, the Canadian Hi-NRG master asked her to become the new lead singer for his band. Now, Zadeh is focusing on her own music, with a sound inspired by New Romantic artists of the early 80s and her own background.

Zadeh, who grew up in the 80s, developed her vocal style from years of listening to singers who influenced her, like Debbie Harry, Tony Hadley and Simon LeBon. In a recent interview on Revenge of the 80s Radio, The Californian singer says she fell in love with early 80s-era new wave, which became important to her development as an artist: â€œit was just so raw and the music was romantic and excitingâ€¦Â  itâ€™s something that I want to revive in my own music now. â€

Continue reading this article on our Examiner.com page: http://www.examiner.com/article/singer-maryam-zadeh-fuses-classic-new-romantic-with-her-own-sound