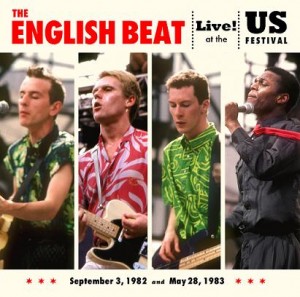 Rare footage of The English Beatâ€™s live performance at the U.S. Festival in 1982 and 1983 will be made available in a special 2 DVD set in September.

The U.S. Festival was held for two weekends in â€™82 and â€™83, featuring acts from several musical genres ranging from U2 to Willie Nelson to The Clash to Fleetwood Mac. Over one million people witnessed the seven days of shows. The English Beatâ€™s sets in both yearsâ€™ events will be featured in the DVD set, The English Beat – Live at the US Festival, ’82 & ‘83, which will be released on September 18, 2012 by Shout! Factory (The English beat and Oingo Boingo were the only two bands to participate in both yearsâ€™ U.S. Festivals). It will be the first English Beat live performance made available to the public on DVD.

In addition to the video footage, the DVD set will come with a Best of the English Beat at the U.S. Festival CD.

In addition, Shout! Factory announced it will release the classic ska bandâ€™s entire music library in a compilation titled: The English Beat, the Complete Box Set on July 10th. It will feature all three of their albums, bonus tracks and previously-unreleased material including Peel Sessions cuts. Also on July 10, Keep the Beat: The Very best of The English Beat, a one-disc â€œgreatest hitsâ€ compilation. Both collections were produced in collaboration with the band, according to a press release from the record company.

Fans can pre-order the DVDs and an autographed copy of the box set on Shout! Factoryâ€™s website.