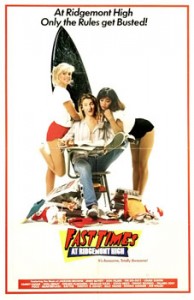 This week marks the 30th anniversary of the release of one of the iconic teen party movies of the 80s, Fast Times at Ridgemont High. Not only is this flick fondly remembered and still quoted by fans, it spawned the careers of several future stars.

Fast Times was more mainstream than many of the other teenage hi-jinks movies of the time like Rock and Roll High School or Up the Academy, in part because it addressed serious issues among teens (albeit comically) like self-image and teen pregnancy. It remains a classic movie with memorable scenes. Director Cameron Crowe adapted the screenplay from his book of the same name.

A young Sean Penn took the silly, clownish role of the terminally-stoned Spicoli and played it so brilliantly that it launched a diverse acting career. His scenes with Ray Walstonâ€™s â€œMr. Handâ€ were magnificently done, as both actors took their one-dimensional characters to a higher comedic level than one would expect form a high school comedy. Phoebe Cates, Jennifer Jason Leigh, Forest Whitaker and Judge Reinhold each earned a successful career after playing major characters in Fast Times. The film also had three young men playing bit roles who would later become stars in their own right: Eric Stoltz, Nicholas Cage and Anthony Edwards. While they did not enjoy stellar on-camera careers, actors Robert Ramonus and Brian Backer did achieve some success throughout the 80s as well.
<center><iframe width=”560″ height=”315″ src=”http://www.youtube.com/embed/FKov1lmq_OU” frameborder=”0″ allowfullscreen></iframe></center>
The most memorable moments of Fast Times at Ridgemont High include Mr. Hand forcing Spicoli to share the pizza he ordered in class, Bard trying to hit on a girl while making food deliveries in his Pirate costume, Damone and Ratnerâ€™s bathroom confrontation as the two argued over Stacy, Mr. Vargasâ€™ class field trip to the morgue, Brad consoling Stacy after she had an abortion and, of course, the Phoebe Cates pool bikini scene as â€œMoving In Stereoâ€ by The Cars played. Interestingly, while the Cates pool exit is virtually synonymous with the movie, â€œMoving In Stereoâ€ was not included in the soundtrack. 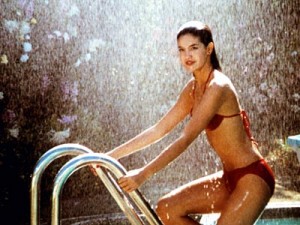 In addition to â€œMoving In Stereo,â€ Fast Tines featured an array of mainstream hits and alternative rock tracks. Classics include music from The Go Gos, Jimmy Buffett, Oingo Boingo, Joe Walsh, Jackson Browne and The Ravyns.

Fast Times at Ridgemont Highâ€™s legacy remains intact as a strong one, despite an unsuccessful sequel, The Wild Life, and a poorly-concocted television sitcom. Aside from the classic lines and the physical comedy, perhaps the most extraordinary aspect to the film is the actorsâ€™ performances by their each adding very human elements to what could have been a bunch of high school student caricatures.