Every six months, I enjoy driving to the semi-annual Chiller Theater Expo to check out the exhibits and share some Guinness with friends; Pumpkin, our official wiener-dog, has a blast there as well. Chiller is generally a horror convention and is considered one of the nation’s most prominent. Still, the Chiller Theater Expo shuold not be pigeon-holed to simply one genre, as it includes musicians, actors and artists as featured guests alongside horror icons. This October’s event will be extra-special to fans of the 1980s as there will be several prominent people from the great decade there to meet fans and showcase their new projects — some of them are past guests on Revenge of the 80s Radio. 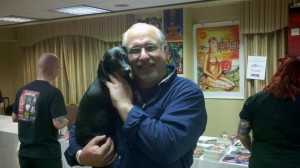 This comingÂ  Chiller Theater Expo will take place at the Sheraton Parsippany (NJ) on October 26-28. Tickets can be pre-ordered here.

Among the 80s icons scheduled to attend are:

and Stephen Bickenstaff, artist for The Cramps album Bad Music for Bad People (1983)

They will also have a “Porky’s Reunion” featuring several actors from the Porky’s movie franchise.

If you go, have a Guinness with Pumpkin and me. We will see you there.