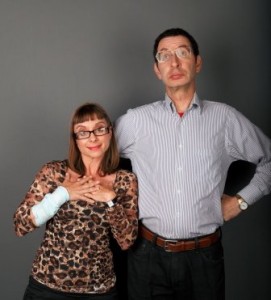 Eddie Deezen is still a cult hero among 80s movie fans, whether he plays the nerdy foil Eugene in Grease/Grease 2, a master of evil (Surf II – the End of the Trilogy), a tough debate team captain (Midnight Madness) or a mafia don (Mob Boss). Now, he is the love-interest subject of a shy mid-western girl in the upcoming short film I Love You Eddie Deezen.

Sherry Mattson is the writer, director, producer and star of the flick, which tells the story of Mabel, who is unhappy and bored with her humdrum life. Needing a change, she decided to set out for Hollywood to find the love of her life: Eddie Deezen.

Mattson will be our guest on the next Revenge of the 80s Radio to talk about the movie, which she dubs “a fish our of water nerd love story.”Maybel does run into a bit of culture shock as she learns how Tinsel Town really works as she seeks the man she loves.

Mattson tells Revenge of the 80s she has wanted to work with Deezen for a long time, dating back to when she waited on the movie icon and his friend at a local diner. The inspiration came recently to do I Love You, Eddie Deezen. She pitched her plan to the actor, who was enthusiastic about the project, and everything came together. The comedy/love story also features the acting talents of Sherry’s dog, Beatrice.

The title track/theme song is performed by an Indiana band named Deezen.

Â  I Love You Eddie Deezen will be premiered at Lola’s martini bar in West Hollywood. Mattson plans to take the film on the festival circuit in the coming year.
Tagged as deezen Eddie Deezen film hollywood i love you eddie deezen mabel movie sherry mattson