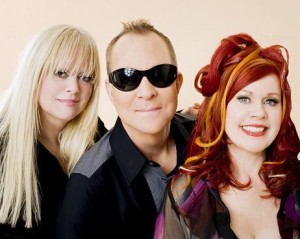 New wave party band The B-52s will lead a star-studded lineup at the Rewind the 80s Music Festival on August 16-18 at Henley-on-Thames in the U.K. Event organizers confirmed the group’s participation today.

Rewind the 80s Festival is one of the world’s biggest retro music fests, attracting over 40,000 people and selling out ni advance over the past few years. In its first four years has featured such iconic 80s names as: Boy George, Village People, The Human League, Gloria Gaynor, Kool & The Gang, Holly Johnson, Bananarama, and many more.

Along with the performances, fans can also enjoy several watering holes, karaoke, camping or stay at the new “Snoozebox” portable hotel.