Ron Asheton tribute concert DVD to be released in June, not Apri 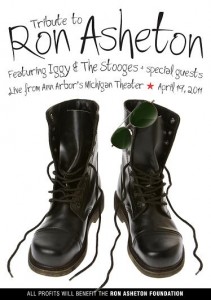 The Ron Asheton Foundation announced on Tuesday the DVD for the 2011 tribute concert in honor of the famed guitarist will be released on June 4, 2013 and not April 9 as previously planned.

Asheton, best known as the former guitarist and co-songwriter for Iggy and the Stooges, died in 2009 and was unable to see his band inducted into the Rock and Roll Hall of Fame a year later. On April 19, 2011, Iggy & the Stooges, Henry Rollins and guest guitarist Deniz Tek performed the concert in Asheton’s remembrance at the Michigan Theater in Ann Arbor to a sold-out crowd of fans.

It was a typical night of Stooges-style brutality but in an even more passionate form, as the group and its guests took a wide swing through the repertoire, clearly moved by the sense of occasion and the cacophonous spirit of the 1,700 fans who snapped up tickets for the concert in less than an hour.

The track list for the DVD will be as follows:

All profits from the DVD sales will go to the Ron Asheton Foundation, which supports animal welfare and music. Pre-orders can be made here.