The Go-Gos, B-52s to tour together as double-bill 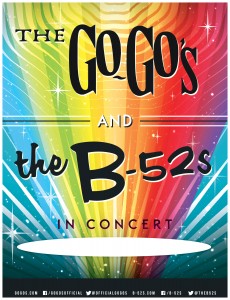 The Go-Gos and The B-52 today announced plans to co-headline tour the U.S. this summer. According to the Go-Gos’ website, exact dates have not been confirmed at the time of this post, but the two alt-pop 80s party bands say they will be stopping in several cities, including New York, Boston, Chicago, Seattle, and Portland.

The Go-Gos began as a group in 1978 as a punk band and later made history as the first all-girl band who played their own instruments on their original songs to hit the Billboard Top 40. They also were the first ladies to play “Johnny Are You Queer?” as a regular concert staple until Josie Cotton would later release the track as a single. They have played live dates regularly together since 1999, despite billing a postponed 2010 concert series as their “Farewell Tour.”

The B-52s. formed in 1976, featured a rather unusual lineup of singers and musicians that gelled together to form a unique sound and quickly earned a reputation as a top party-music band. Their classics include “Rock Lobster,” “Love Shack” and “Song forÂ  Future Generation.” They continue to hit the stage together as major headliners.

Also, upon visiting the Hudson Valley, fans may find it fun to book a room at Kate Pierson’s Lazy Meadow in Mt. Tremper, NY.