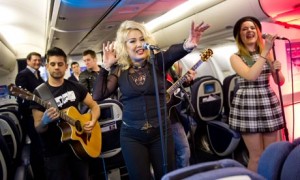 80s icons Tony Hadley and Kim Wilde hopped a British Airways plane on Sunday to play an acoustic gig for fliers and staff. They set a world record as they performed at an altitude of 43.000 feet.

With help from Bananarama and Go West, Wilde and Hadley put on the show to benefit Comic Relief. The previous record was 42,080 feet in the air, set by James Blunt.

Hadley says of the feat: “I’m very excited to be in the Guinness Book of Records, it’s quite an amazing feat to be part of.”

British Airways has partnered with Comic Relief in fundraising efforts for many years, raising Â£4.5 million with their efforts.