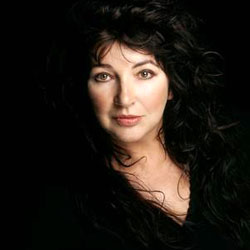 Kate Bush today was honored in a special ceremony as a Commander of the Most Excellent Order of the British Empire. A medal was bestowed upon the singer today by Queen Elizabeth II at Windsor Castle.

Bush received the CBE for her services to music throughout her career, which began in 1978 with her first album, The Kick Inside, after begin discovered by respected rocker David Gilmour. In a statement she released on her official website, the singer dedicated the medal to her family and music collaborators:

I feel incredibly thrilled to receive this honor which I share with my family, friends and fellow musicians and everyone who has been such an important part of it all. Now I’ve got something really special to put on top of the Christmas tree. The ‘everyone’ in the quote above of course includes all of you.Â  Thank you so very much for all your fantastic support and encouragement.Â  I feel extremely privileged to still have an audience.Â  It’s you that have made my work, which would otherwise have just been creative projects, into a success.

Bush’s career is highlighted by several awards for her videos and music. Her most memorable songs include “Running Up That Hill,” “Wuthering Heights,” “Babooska,” “This Woman’s Work” and “The Man With the Child in His Eyes,’ which she wrote at age sixteen.

Her most recent album, the award-winning 50 Words For Snow, was recorded and released in 2011.