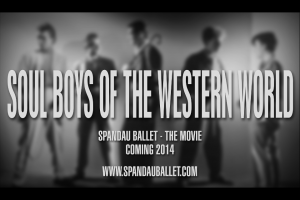 Spandau Ballet announced today on their website that the group will be featured in an upcoming documentary film.

While little details are out as of the publishing of this post, the title will be: Soul Boys of the Western World: Spandau Ballet – the Movie. If all goes to plan, it will be in theaters in 2014.

The announcement comes only a day after the band, which is celebrating its 30th anniversary, made available a limited number of special 20×20 lithographs of the “True” album artwork with hand-signed autographs from its members on each.

Update: Spandau Ballet announced they will release a special edition 2-CD set re-release of their 1983 “True” album to celebrate their hit title track’s 30th anniversary complete with remixes and previously-unreleased music. Fans will also be treated to a free Spandau Ballet App (available on April 26).