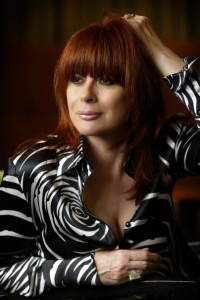 After a long fight with breast cancer and Multiple Sclerosis, singer Christina Amphlett of the Divinyls passed away at her New York home yesterday. She was 53.

Amphlett announced to her fans she had multiple sclerosis in 2007 and was diagnosed with breast cancer in 2010. Her husband of 14 years, musician Charley Drayton, released the news in a statement on Sunday, April 21:

“Christine Joy Amphlett succumbed to the effects of breast cancer and multiple sclerosis, diseases she vigorously fought with exceptional bravery and dignity… Chrissyâ€™s light burns so very brightly. Hers was a life of passion and creativity; she always lived it to the fullest. With her force of character and vocal strength she paved the way for strong, sexy, outspoken women.”

Amphlett was best known for her distinct vocal style fronting the Divinyls, which she co-founded with ex-Air Supply members Mark McEntree and Jeremy Paul. They found success quickly as “Boys In Town,” a song they recorded for the movie “Monkey Grip,” reached the top 10 on the Australian singles chart in 1981. They would score several hits in their native Australia throughout the 80s including “Science Fiction,” “Sleeping Beauty” and “Good Die Young.” With those tracks, they earned airplay on top alternative stations in the US. “Science Fiction” was named one of the top 30 Australian Singles of all-time by Australian Performing Right Association.

Their breakthrough hit, “Pleasure and Pain,” won the band their most prominent international attention to date in 1987. Four years later, they would achieve chart success around the world with the hit “I Touch Myself.” Amphlett and McEntree’s most recent single was “Don’t Wanna Do this,” recorded in 2007 after the group was inducted into the ARIA hall of Fame.

In March 2012, the singer posted a heartfelt status to her fans on her Facebook page:

Unfortunately the last 18 months have been a real challenge for me having breast cancer and MS and all the new places that will take you.You become sadly a patient in a world of waiting rooms,waiting sometimes hours for a result or an appointment and you spend a lot time in cold machines like MRI,CT machines,hospital beds,on your knees praying for miracles,operating rooms,tests after tests,looking at healthy people skip down the street like you once did and you took it all for granted and now wish you could do that.
I have not stopped singing throughout all this in my dreams and to be once again performing and doing what I love to do.I have been writing the occasional song with a wonderful collaborator Kraig Jarret and two weeks ago we performed some of those songs in NYC in the West Village.My illnesses have really exhausted this little body of mine that I have thrown from one end of a stage to another and performed thousands of shows thats sadly some of you missed.With that said I am getting stronger but there is still some fine tuning and work to be done on myself.It’s a different self but my voice is strong and not affected by the MS as some reviewers have cruelly reported.I can walk altho sometimes I wobble but try to wobble with the beat.I look after myself and my husband has been through this with me every part of the way and I cannot imagine what I would have done without him and his kindness.I did something right.My lttle dog Holiday lays on the end of the bed when I am not feeling great and doesn’t leave my side.I don’t reach out to people and talk about what I go through as we are all going through something and for someone who once was fancy free I have all of this in my life “So I Know”.I am grateful to have the knowledge that all of this has shown me and I feel privledged that I am strong enough to “know” and share that it’s really alright.I will sing again,I will perform again but this time “I know” I hope you understand what I mean and if you don’t you will one day and be grateful.Yes Lawrence What A Life and this is Life.We must never be afraid.

Amphlett’s distinct voice was both unmatchable and unforgettable. She was as sensual as she was strong when performing in her videos and will be greatly missed. Revenge of the 80s will play a block of Divinyls music in honor of her passing.