Click here to listen live between 10pm and midnight Eastern US Time You can also get the show from our flagship station website: www.wtbq.com.Â  ***Check the bottom of this post for other affiliates’ dates and times. 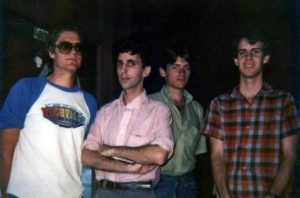 This week’s show podcast/syndication edit is up. There were many great bands deep within the LA alt-rock scene of the late 70s and early 80s who did not get to break through or have the radio airplay they deserved, yet were big parts of the regional circuit. One such band is The Lopez Beatles. You may have seen their video for â€œBitchen Partyâ€ on the MTV Basement Tapes show in 1985, which held its own in a viewer voting bracket featuring the eventual winner. Lopez Beatlesâ€™ lead singer Bruce Rhodewalt talks with host Chris Cordani on the next Revenge of the 80s Radio about the band, its formation, their entry into the Basement Tapes show, some of their interesting moments within the LA alt-rock/punk circuit, what the members are doing today and the many Easy Riders, Heads of NATO and Karma Salesmen who came to their Bitchen Party with them and Quasimodo.