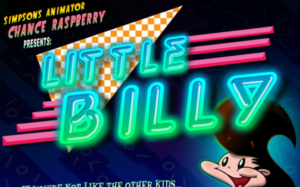 Our Dec. 1-7 show podcast/syndication edit is up.

This week, Emmy Award-winning lead animator from The Simpsons and Tourette’s Syndrome conqueror Chance Raspberry talks about his new project, which looks to be the Ultimate 80s Cartoon Sitcom: Little Billy. You can help make this a reality.

Little Billy is based on Chanceâ€™s own life growing up in the 80s with Touretteâ€™s Syndrome, where he found solace in the decadeâ€™s cartoons, sitcoms, style and music much like Raspberry in real life, who became enamored with animation at the time:

â€œAs the â€˜Spazz,â€™ â€˜Weirdoâ€™ or â€˜Strange Kidâ€™ growing up in the 80s [while battling Touretteâ€™s], the Dark Ages of Special Needs Awareness, animation was a healing force whether I was watching it, tracing it or drawing my ownâ€ â€“ Chance Raspberry

While he has recruited some of the nationâ€™s top artists from the likes of the original He-Man series, 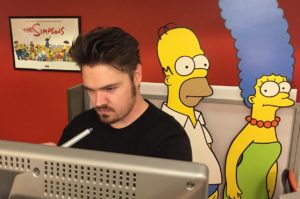 The Garbage Pail Kids and â€œBetter Off Dead,â€ Chance is producing Little Billy on his own and has established an Indegogo crowdfunding campaign at www.littlebilly.com.

Also, as Billy will be the first title cartoon character with a neuro disorder and Little Billy is poised to lead the new charge of Neurodiversity on television, some of the proceeds from the Indegogo campaign will go to the Touretteâ€™s Association of America.

Little Billy is filled with 80s nostalgia, music, imagination, wild adverntures and fun. Perhaps there is a bit of Billy in all of us. Please consider making a donation on Chanceâ€™s Indegogo campaign to help make it happen.

Enjoy the trailer below and find out more about Chance Raspberry and Billyâ€™s adventures on this weekâ€™s Revenge of the 80s Radio and on the Little Billy Indegogo campaign page. Also, while you help make â€œLittle Billyâ€ a reality, you can choose from a number of cool Indegogo Perks from Chance ranging from prints, â€œLittle Billyâ€ items, shirts, show-specific items, sticker cards, cells and even a one-on-one animation lesson with Raspberry in person.

We also play a music block tribute to the late Tommy Keene and tracks from Book of Love, Interview, XTC, The Saints, The Clash, Stan Ridgway and more.