Our July 5-11 show with Blotto’s F. Lee Harvey Blotto is up.

Click here to listen live between 10pm and midnight Eastern US Time You can also get the show from our flagship station website: www.wtbq.com. ***Check the bottom of this post for other affiliates’ dates and times. 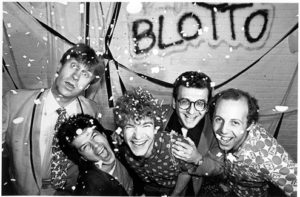 F. Lee Harvey Blotto, Paul Rapp, of the upstate New York band Blotto talks with Chris on this week’s Revenge of the 80s Radio. Paul talks about the band, its formation, having its video as one of the first on MTV, Blotto highlights and the passing of lead singer Sergeant Blotto.

Revenge of the 80s Radio also broadcasts each week on our affiliate radio stations:
Tagged as 80s podcasts 80s radio blotto i want to be a lifeguard interview new wave podcasts paul rapp