The Podcast for Our 1/7 Show with Vivien Goldman, “The Punk Professor,” Is Up

The podcast for this week’s Revenge of the 80s Radio show is up and available at the bottom of this post. Hour 2 features a conversation with Vivien Goldman, known as “The Punk Professor.” She is a founding member of The Flying Lizards, the author of several books including The Book of Exodus and Indiscreet, a journalist, artist, television personality and Professor of Punk and Reggae at New York University.

Goldman’s warm personality shines as we discuss her wealth of knowledge, her accomplishments and her world travels. Her love of music led Vivien to a career spanning several aspects of the arts.
One of the many highlights of her resume is the cult hit song “Launderette” from her Dirty Washing EP. She has also recently completed a musical based on the band Kid Creole and the Coconuts (she also appears in Adriana Kaegi‘s documentary “Kid Creole and My Coconuts“) and is currently teaching a course at NYU on Bob Marley, with whom she became very close with. Goldman is also a well sought-after speaker and lectures large audiences on punk and reggae music all over the United States. 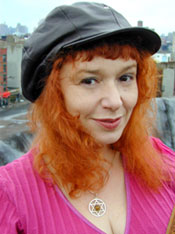 During our interview, Vivien Goldman and I discuss various topics including:

Hour 1 features music from Gorevette and classic cuts by Nikki and the Corvettes, The Undertones, INXS, Berlin, Mental As Anything, Icehouse, Kid Creole and the Coconuts and more.