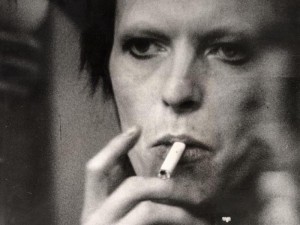 I recently took time to see the David Bowie: Artist exhibit at the Museum of Arts and Design (MAD) while in New York City on Thursday. The retrospective features several videos spanning Bowie’s entire career, live shows, his acting prowess and a look at his artistic roots and influences. The museum also screened a documentary on the singer/producer and offered younger fans a chance to catch him in “The Man Who Fell to Earth,” Bowie’s first starring role.

While at the sixth-floor exhibit, there were fans of all ages paying homage to one of the 20th century’s most dynamic and diverse artistic talents. While the early 80s videos brought back some memories, it was good to see his videos from the 1990s which were rarely seen in the U.S. Still, when looking back at Bowie’s early work, his pioneering video effects that may seem primitive to the digital age producers of today actually brought to life the idea of adding visual artistry to the music video — a strategy quickly adapted by select producers in the US and UK and eventually led to the golden age of music videos.

Overall, the exhibit is both enjoyable and intriguing as it gives the viewer a real look into Bowie’s full history and background as an artist and showcases his talents in everything from cabaret to painting to mime to cool suits.

The David Bowie: Artist exhibit will be at the Museum or Arts and Design (2 Columbus Circle, NYC) through July 15th. Information on the event and admission can be found on the MAD website.