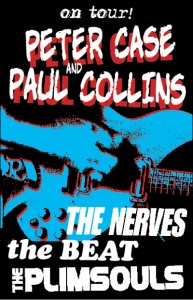 The Nerves co-founders Paul Collins and Peter Case tour dates are official. This comes after their initial announcement in November that the two would reunite to co-headline together this year.

Collins and Case will be accompanied by Timm Buechler on bass and drummer Amos Pitsch. They will perform classics from the bands they formed together, The Nerves and The Breakaways, as well as tracks from Collinsâ€™ Beat and Caseâ€™s Plimsouls.

While some venues have not yet been announced, here are the official Collins/Case tour dates and cities:

Collins, Case and Leeformed The Nerves in 1974 and produced a new, unique sound that would influence many bands to come. With that, they created the Power Pop genre, which continues to have a huge worldwide following. While The Nerves only officially released one EP, one of its tracks was the history-making “Hanging on the Telephone.” That track would later be covered by Blondie and become a mainstream chart hit.

After The Nerves broke up, Collins and Case stayed together to form The Breakaways before going their separate ways: Collins went on to lead The Beat, whose most remembered singles include “There She Goes” and “Rock and Roll Girl.” Case formed The Plimsouls, who scored hits with “A Million Miles Away” and “Eyes of a Stranger.” Both bands kept the true soul of their original Power Pop as their musical foundations.