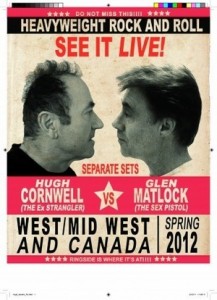 Two of punk rockâ€™s early legends will begin a tour of North America on Friday, February 24th. Hugh Cornwell, original vocalist for The Stranglers and Glen Matlock, bassist for The Sex Pistols, will co-headline the concert series, which will run through March 17th.

Cornwell will be playing some of his acclaimed solo music and Stranglers classics; Matlock will performÂ  tracks from his latest album, Born Running, and some new material. The lineup also includes Clem Burke (Blondie) and Steve Fishman, who will be playing with both Cornwell and Matlock.

The Western Hemisphere swing starts up in Tucson, Arizona at Club Congress and winds down in Los Angeles. The official tour dates are:

Cornwell will soon release a new album, Totem & Taboo, which was financed through a pledgemusic.com campaign. Â Matlock has worked on various projects, both as a solo artist and with various bands, in recent years. Â He is also the bass player for the recently-reformed Faces.