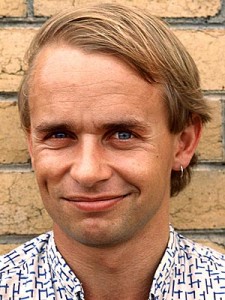 Greg Ham, multi-instrumentalist for Men at Work, wasÂ found dead in his Malbourne, Australia home on Thursday. He was 58.

Among the various woodwind solos Ham will always be remembered for are theÂ saxÂ interludeÂ from “Who Can It Be Now?” and the flute melody in “Down Under.”

Ham’s was discovered after some neighbors realized they had not heard from him in a few days and contacted police. According to various Australian newspapers, police have been investigating his death, but believe that there is no evidence of foul play.

“There are a number of unexplained aspects to it which has caused our attendance here today, and we’re assisting the local detectives to determine what has occurred,” Detective Senior Sergeant Shane O’Connell told reporters.

I met Greg Ham 40 years ago, at Kim Gyngellâ€™s house in 1972. Last year of high school. He had blond hair, rosy cheeks, ridiculously bright eyes, and along with Gyngell, was the funniest person I knew. He was sharp, real sharp. We were friends from then on, we liked each other. He lived for a while in Park Street in St Kilda, in a communal household, which was the best of times. The best parties ever. Greg took up the saxophone and flute during this time, he was always practicing. He got really good. We shared countless, unbelievably memorable times together, from stumbling through Richmond after playing the Cricketers Arms, to helicoptering into New York City, to appear on Saturday Night Live, or flying through dust storms in Arizona, above the Grand Canyon, or getting lost, driving aimlessly through the Gippsland countryside. We played in a band and conquered the world together. I love him very much. Heâ€™s a beautiful man. He never lost his love and passion for music, and indeed taught music to kids over the last few years. He was a great teacher, and they loved him. The saxophone solo onÂ Who Can It Be Now, was the rehearsal take. We kept it, that was the one. Heâ€™s here forever. Iâ€™m thinking about his family, and hoping they are receiving the love and support they need and deserve.

Hay indicated to Australian reporters that Ham was angry and hurtÂ over recently losing a lawsuit claiming that he stole the flute melody for “Down Under” from the 1932 children’s folk tune “Kookaburra Sits in the Old Gum Tree” by Marion Sinclair. “Â  The MAW leader, who is touring the U.S., said the ABC (Australia) that the lawsuit may have been devastating to his overall psyche: Â “The last time I saw him was a few months ago and … it’s a long-term thing. There’s always a long-term thing for all of us, the issue of addiction I think.”

Revenge of the 80s Radio will play a tribute music block to Ham no the 4/27 show.