Blondie, Devo, to co-headline ‘Whip It to Shredsâ€™ tour 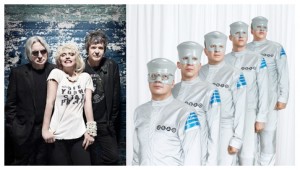 Two iconic bands of the new wave era will co-headline a tour together. Blondie and Devo will play 13 dates for their â€œWhip It to Shredsâ€ concert series in September.

The two groups kick off their tour on September 7th in Woodville, Washington and will perform through September 26th in Chicago with stops in places including Houston, San Francisco and Los Angeles.

Original Blondie members Deborah Harry, Chris Stein and Clem Barker and newer band members Leigh Foxx, Tommy Kessler and Matt Katz-Bohen will share the bill with Devo co-founders Mark and Bob Mothersbaugh and Gerald and Bob Casale plus tour drummer Jeff Friedl. They will play a mix of classic songs and their recent work. Tickets are available here; the tour dates are:

On touring together, Harry commented on her bandâ€™s website: â€œWe canâ€™t wait to get out on the road with Devo. Itâ€™s going to be an incredible show and weâ€™re excited to share it with our fans.â€

Motherspaugh is also enthusiastic about the endeavor: â€œWe are looking forward to performing alongside Blondie and swapping costumes backstage.â€

Both groups have been touring since releasing critically-acclaimed albums in the past years: Blondie recorded Panic of Girls in 2011 and Devo put out Something for Everybody in 2010.