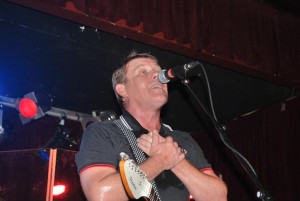 Ska royalty meets the High Priest of Power Pop: Dave Wakelingâ€™s English Beat and The Paul Collins Beat are touring together for the first time. Under the title Two Beats Heart as One, they make a stop in New York City, playing in front of a lively crowd at B.B. Kings Blues Club and Grill on 42nd Street.

Although both Beats formed in the late 1970s with the same band name and have been touring regularly in recent years, never have the two played together until this October. In a recent interview on Revenge of the 80s Radio, Collins recalled times where the two groups played in the same city and one time across the street from each other on a night in Pittsburgh. Finally, the two Beat leaders made the plan, which included their October 16th date at B.B. Kingâ€™s. 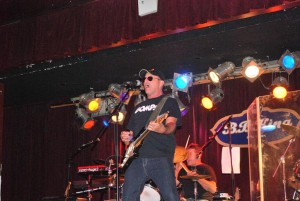 The Paul Collins Beat took the stage first in his home town, kicking off his set with two Beat classics, â€œI Donâ€™t Fit Inâ€ and â€œWorkaday World.â€ His guitar-driven power pop was a sharp contrast to Wakelingâ€™s brand of ska, but fans of both bands were quick to get up and dance to Collinsâ€™ timeless grooves. He mixed Beat staples with a couple of songs from The Nerves and The Breakaways as well as something from his newest album, The King of Power Pop. 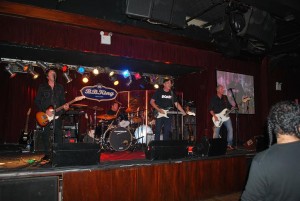 Collins, being the de facto point man for the power pop genre, is looked to as a leader for DIY bands across the world. He and his band did not disappoint concert-goers. They came out in t-shirts and played hard, as would a championship hockey teamâ€™s top checking line. Even though one got the impression these men were hard at work on stage, they also looked like they were genuinely having fun. While not moving much, Collins commands the stage simply by making a stance, leaning forward a bit and strumming the guitar with unmatched drive. After playing several powerful tracks including â€œThe Kids Are the Same,â€ â€œRock and Roll Girlâ€ and â€œWalking Out on Loveâ€ The Beat closed its set with the slightly-lest-fast hit â€œDifferent Kind of Girl.â€ 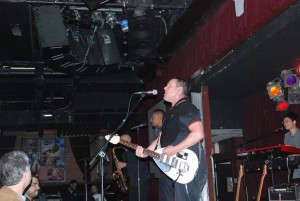 The English Beat performed next, with Wakeling leading the set off with a song that did not chart, â€œRough Rider,â€ before instantly going into their first hit, â€œTears of a Clown.â€ As always, Wakeling plays classics from both The English Beat and General Public, but he likes to mix in some deeper cuts as well. Fittingly, they played â€œClick, Clickâ€ mid-set, which mixes super-charged ska with a bit of Collins-esque power-pop (maybe some more power pop bands should consider adding a saxophone player). 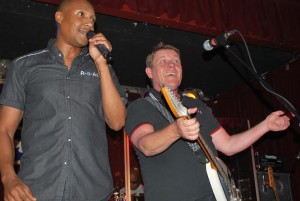 English Beat fans were treated to extended, jazzed-up versions of some of the bandâ€™s biggest hits, energetic solos from each member and outstanding original rhymes from Antonee First Class (Ranking Roger fronts his own English Beat band in the UK). Wakeling has put together a group of stellar musicians who match the quality of his original band.

As always, B.B. Kings is a fantastic venue to catch a good show. There are no bad seats and a dance floor for fans who want to let loose while watching their favorite artists on stage. The servers were prompt and courteous as well. I am always happy to quaff a Guinness while reviewing shows there, and I will gladly recommend their homemade key lime pie to you if you fancy an exquisite dessert.