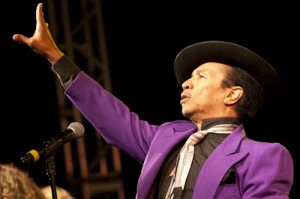 The creative genius of August “Kid Creole” Darnell is inspired through musical elements from around the globe and draws from an array of emotions. His genre-crossing creations are celebrated and respected around the world. Still, such inspiration can come from unexpected places as the Kid’s most recent single, Muchachacha, comes from a chance encounter while collecting himself after a breakup.

“Muchachita” is Darnell’s first collaboration with a couple of Italian musicians, Los Locos, he met recently while in St. Lucia. At the time, he was taking a vacation after his relationship with a lady ended. Darnell tells the story on his Soundcloud page:

I was minding my own business on a deserted beach in St Lucia. I was just dumped by my girlfriend for being too intelligent so I was feeling mellow. I needed solitude. However, my reverie was abruptly disturbed by a boom box belching out loud music. Too loud. My first impulse was to leap upon the transgressors and throw sand in their eyes. But then my ears demanded that I cast aside the isolation and embrace this disturbance.

The music emanating from this giant music box was an infectious Latin rhythm that immediately ordered my toes to move. I was not familiar with this jam. I turned my head to witness two couples who had taken up positions on the beach not far from me. I could tell by the wild hand gestures and the mellifluous language that they were Italians. Had it not been for the enchanting music I would have pondered aloud “why on earth have you parked your carcasses so close to me when this whole damn beach is empty?” All four of them seemed to know the song because they were singing along to the words and dancing joyously. Curiosity got the better of this cat. I arose and crossed over to Italy.

To make a short story long, I discovered that the gentlemen were musicians and their fascinating ladies were singers. And the song – one of their compositions. Wow! I introduced myself and lo and behold they showered me with accolades. They were very familiar with the legendary Creolian Mission! Is that why they decided to set up camp so close to me, myself and I? Their group was called Los Locos! Cocos and Locos. It doesn’t get better than that.

Thus was born a friendship on a Caribbean island between a forlorn guy from the Bronx and two happy-go-lucky Italians named Roby and Paolo. We decided there and then on those golden sands that we would meet up some day in the future and write music together.
And unlike the thousands of people who talk such s*** but never follow through, we actually did meet up in Italy six months later. And the first song we wrote was a song called Muchachacha; A song that I am more than pleased to dedicate to the b**** that broke my heart!

You can download the track on iTunes; here is a special lyrical Youtube video put together for “Muchachacha:”