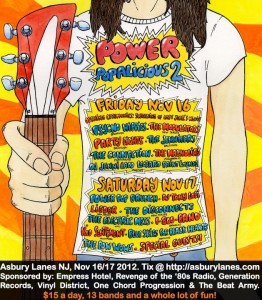 Power pop fans from all over the New York-Metro area crowded The Cake Shop on Friday and Saturday night to celebrate the guitar-driven musical genre at Power Pop-A-Licious 2 with The Paul Collins Beat and a heavy-hitting lineup of long-established and up-and-coming bands.

Collins says he is pleased with the success of the event and its spotlighting of some of its top acts in the northeastern U.S. and Canada. He expressed the importance of the spirit of the show:

â€œPower Pop-A-Licious 2 is a unifying rally cry for the thriving rock-n-roll subculture, and is a means for power pop fans of all ages to discover a wealth of talented new acts in one power-packed weekend… All these bands are serious about what they are doing; they are all out there trying to make something happen, I am proud to be able to help them achieve that goal.â€

After being postponed from its November dates in Asbury Park, New Jersey due to the aftermath of Hurricane Sandy, Collins’ second Power Pop-A-Licious Fest was moved to The Cake Shop, where those attending saw a lineup led off on day one by The Whims out of Brooklyn followed by The Disconnects (New Jersey), Party Lights (Brooklyn), The Connection (Portsmouth), Kurt Baker (Portsmouth) and Kid Sentiment from Montreal. Kid Sentiment’s bassist Cynthia Sentiment also celebrated her birthday that evening. 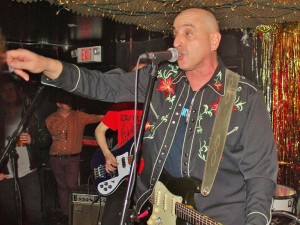 DJ Tony LoFi of One Chord Progression spun classic and current tracks both nights between sets. Also on hand were popular DJ Dave “The Boogeyman) and Bobcat Rawks.

Only two days after Power Pop-A-Licious 2, Collins set out to begin his Midwestern U.S. tour.

Check out our full slide show on our Revenge of the 80s Examiner page: Highlights from Power Pop-A-Licious 2