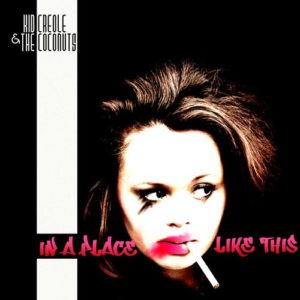 As he announced weeks back, August “Kid Creole” Darnell has been working on some quite inspired new music. Shortly after releasing “Muchachacha,” Darnell came out of the studio with his latest single, “In a Place Like This.”

The Kid combines his swanky classic vocal style with a smooth falsetto, sometimes switching off and other times putting them together in melodic harmony. The soft background beats belie the sleazy dive of a club that he is singing about to a lady who took retreat there with a large amount of alcohol.

Unlike his 80s persona,Â  Kid Creole is not hitting on babes with the song or trying to weasel out of something. He is the good guy here, trying to rescue a lady from the seedy scene. He leads off with a description, piquing listeners’ imaginations: “In a corner there’s a bar/Barman has a bloody scar/very sleazy, weazy-queasy/In the toilet there’s a ragged fool/selling coke and acting cool/pretty icky, awful, sickly”

“In a Place Like This” is available through several digital outlets and Kid Creole and the Coconuts’ website.