Kid Creole & the Coconuts new video: ‘In a Place Like This’ 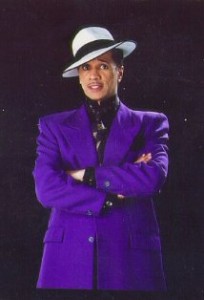 Kid Creole and the Coconuts today released the video for their new single, “In a Place Like This,” featuring August Darnell portraying a worried fellow, warning a young lady about her going down the wrong path.

Scenes change from Darnell singing in a snowy field to a well-groomed pathway to a dank garbage-filled alleyway. As for the assortment of fine suits and hats, the Kid does not disappoint longtime fans in that department.

Darnell’s performance is impressive, as he looked genuinely affected and disappointed as he was playing a fatherly character to the young girl in the video. He showed a more dramatic side to his persona, which was historically best-known for doing things most men would not be able to get away with in real life.Â  He projected a combination of sadness and a slight degree of helplessness while observing the girl constantly argue with her mother andÂ  frequent sleazy drug-filled clubs. Still, at the end, he takes a stronger tone as if to give a final warning and enlighten the young lady to the shame she will feel if she continues her chosen lifestyle.

Elements of the video’s post-production add to the drama of “In a Place Like This.” Well-placed cuts, sepia filters and an slight blurring effect (around 2:55 into the video) bring an extra level of emotion into the brilliantly-sung track.

“In a Place Like This” is the second new track Darnell has released in 2013. The track is available via download on Amazon.com.