The B-52s “Funplex” Released This Week

They are back — the B-52s make a strong comeback and not forgetting thier 1980s New Wave roots. The new CD, “Funplex,” is as much fun as the band’s earlier works and perhaps that blast of energy the music industry really needs. This has been a great two-year span for 80s fans; new projects from Annabella, Josie Cotton, Allison Moyet, among others, have been released. 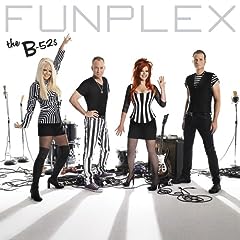 In addition, they are touring the U.S.You can pick up a copy of “Funplex” from our Revenge of the 80s Amazon Store – New Projects section.As always, the combination of Fred Schneider, Kate Pierson and Cindy Wilson bring a unique party blend to the B-52s musical style. The title track, featuring Schneider on the lead, made me want to practice MY Fred Schneider voice again, Tom Tucker-style. The bouncy guitar in “Pump” is remeniscent of the band’s first album and the rest of theÂ CD seems to be more like the style of the band pre-Cosmic Thing (their strongest chart success).

“Funplex” will not disappoint hardcore B-52s fans, and is guaranteed to bring in a whole slew of new ones. In the meantime get tickets to see them on tour. There may be another very long wait after this one.