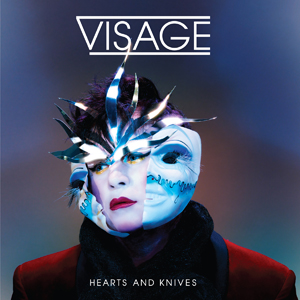 New Romantic pioneers Visage will release their fourth studio album, Hearts and Knives, in the U.S. on June 11th. It will be the band’s first set of new music made public since 1984.

â€œIt has been 29 years since the last Visage album and during that period it often seems like we have all lived through several lifetimes,â€ says lead singer Steve Strange, who founded the band with Rusty Egan and Midge Ure.

Hearts and Knives features the vintage Visage sound, which propelled the group to international acclaim with their biggest singles, “Fade to Grey,” “Mind of a Toy” and “Night Train.” According to a press release, the album will include collaborations and contributions from Dave Formula (former Visage and Magazine keyboard player), Mick MacNeil (the former keyboard player and creative musical core of Simple Minds), ’80s super producer Youth, Rich Mowatt and Logan Sky.