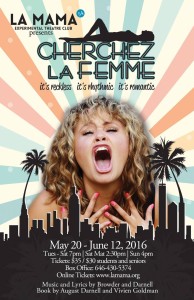 Although he is an internationally-acclaimed musician and all-around entertainer, August Darnell (known to many of his fans as “Kid Creole”) has said many times in the past, including a past interview on Revenge of the 80s Radio, he always wanted to write a musical and send it to the stage. That dream is now a reality as Cherchez La Femme opens tonight to a sold-out crowd at La MaMa Theater in New York City. 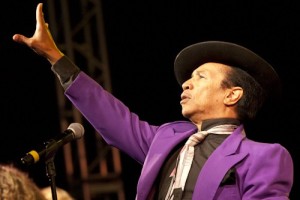 Darnell co-wrote Cherchez La Femme with longtime friend and creator Vivien Goldman, who appeared on Revenge of the 80s Radio a few weeks ago to talk about the playÂ (the program with the interview is at the top of this post). It is based on the music of Darnell and his brother, the late Stony Browder Jr, and features choreography by Adriana Kaegi, the original Mama Coconut.

Several fans helped make the musical come to fruition with contributions made to an Indiegogo campaign.

The story hits both light and dark themes ranging from unrequited love to loss to the allure of success.Â Highlights form the score include such Darnell classics as Â The score is comprised of the iconic title song “Cherchez La Femme” and other hits by Kid Creole and the Coconuts, such as â€œAnnie, Iâ€™m Not Your Daddy,â€ â€œStool Pigeon,â€ â€œEndicottâ€ and â€œIâ€™m A Wonderful Thing Baby,â€ along with new compositions.

Cherchez La Femme runs at La MaMa Theater May 23 through June 12. Tickets can be ordered through the theater’s website.