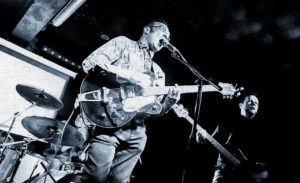 Our 8/10-16 Revenge of the #80s Radio podcast/syndication edition is up. Jeremy Thoms, of The President’s Men, Strawberry Tarts, The Revillos, The Desperados, The Naturals and several other bands out of Scotland throughout the 80s and beyond will talk with host Chris Cordani this week on Revenge of the 80s Radio about his newest band, The Cathode Ray. This group, which also features Neil Baldwin of The Bluebells, will release a new album in January 2019 from which we play the first single: “Another World.” Thoms also tells our listeners about Sterrogram Records, the company he co-founded with Innes Reekie.