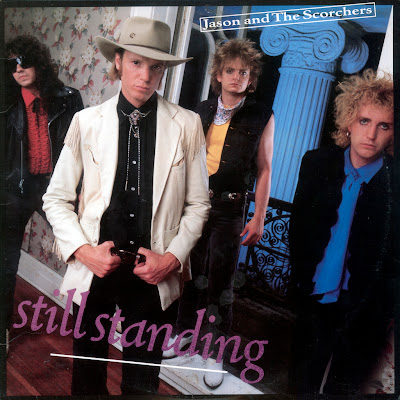 One of the great things about running a classic alternative radio show from the 1980s is being able to play the wide selection of music that qualifies. Classic Alternative is thought of, by many, as new wave music, its pop-crossovers and offshoots like “New Romantic” or “Darkwave.” The 1980s was a time where experimentation earned an artist anything between a rabid cult following to an interesting landmark in music history. Alternative radio stations actually played “alternative music” back then, until the industry commercialized the moniker and made the average teen confuse commercial grunge-pop-rock with real alt-rock. Around now one might imagine me as a grandfather sitting on a rocking chair spouting memories of $1.00 per gallon gas, large cellular phones and quality thin ties so therefore, I will digress.

As host and producer of Revenge of the 80s, the parameters of the program allow me to play all sorts of classic alternative music whether it be the conventional new wave, second wave, alt-rock, psychobilly, no wave, two-tone, swing, hit crossover, punk… (the message should be received by now). [amazonify]B001AGGUGG[/amazonify] One arm of alt-80s that remains fascinating and interestingly relevant to today in many circles is the decade’s breed of alternative Country/Americana. This particular music genre combined the “new wave” of the time with classic hard-edge twang country, southern rock and southwestern style that found its way all over the country, from local mid-western bars to the concert halls of the cities and found themselves with somewhat regular airplay on music video shows. ,Leaders of the movement included the likes of Rodney Cromwell (nominated for a Grammy as recently as 2009), Nick Lowe, Lone Justice, Australian Nick Cave and Jason & The Scorchers. These music legends were far enough out of the mainstream but steeped into classic American culture to put out a brand of interesting, yet exciting music attracting an audience with similar disdain for the developing trend of mainstreaming the sound they perfected.

All of this leads up to the news that Jason & the Scorchers announced on their official website that they are putting out a new album, Halycon Times, in 2010. The forthcoming CD’s first release, “Beat On the Mountan,” will appear in the PBS documentary Coal Country in November. All of this will be preceded by the band’s unveiling of their new official website in October.

My first memory of Jason and the Scorchers was seeing their video for “Absolutely Sweet Marie” on HBO’s “Video Jukebox,” whose producers had a knack for finding and airing some very obscure, but deserving, artists of the time. It made me rush out and buy their Fervor album, which made them the first country-ish band added to my collection; Nick Lowe and his Cowboy Outfit was a close second.

Fervor led off with “Absolutely Sweet Marie” and went right in to the more twangy (and very well-done) “Help There’s a Fire” with five other tracks, including “Hot Nights in Georgia” and “Harvest Moon.” After a couple more albums were released, the band broke up; in 1992 Jason Ringenburg later released One Foot in the Honey-Tonk a well-received (by critics), but obscure, solo album that needs to be given some airtime here as a “later cut.” He put out four more over the past nine years. The band reunited in 1998, toured and recorded a few albums. Halycon Times will be Jason & the Scorchers‘ first new music album as a band since 2001.

As required with the better alt-County/Americana artists of the 80s, Jason & the Scorchers brought to the stage and studio their own unique sound, one described by Ringenburg (according to critic Jimmy Guternam) as a “religious service, only a lot dirtier.” Country-Rock pioneers Jerry Lee Lewis and Elvis would have been proud to see where Jason & the Scorchers took their genre, and so might the great evangelists of the time.