Irish New Wave Fans to Have Regeneration Tour of Their Own 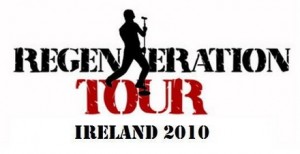 While classic alternative music fans in North America are awaiting news of 2010 Regeneration Tour Dates, promoters have set up a concert series in Ireland for April 30-May 2. According to the Tour’s official MySpace Page, the headliners will be Howard Jones, Belinda Carlisle, T’Pau and China Crisis.

The Regeneration Tour has had successful runs in the United States for the past two years with acts such as ABC, Berlin, Wang Chung, A Flock of Seagulls, Missing Persons and The Human League leading participating. While there has been no official announcement as to who might be on a potential regeneration Tour list for this year, names that have been thrown around the official website’s forum by organizers Red Entertainment include Kajagoogoo, China Crisis and Alphaville. We will keep you up to date on anything that develops.

For fans in the UK who want to see the Ireland mini-tour, here are the announced dates:

Tickets can be purchased through Ireland’s Ticketmaster. There are also hotel/concert packages being offered for those who want to stay the night or travel overseas to see the show and make a vacation out of it.