John Doe Invites Fans to “Step Inside the Studio” on Saturday

Whether he is working with his X band mates, a new band or on a solo project, John Doe is not one to shun innovation. In announcing on his website that he will be doing a tandem EP with singer Jill Sobule, the two are inviting 40 fans to come to The Pass Studios in Los Angeles to witness and take part in their live recordings of several tracks for their upcoming releases. 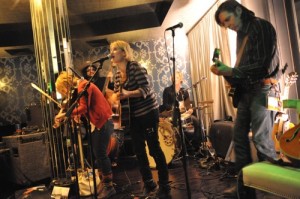 It would seem that recording their albums on the same day with the same band is a cunning plan by both acclaimed musicians to find a new way to fund studio time. This may be less of a stunt than something others might want to pay attention to as it not only handles the financial end, but allows fans to share some intimate time with the artists as they create, rehearse and refine.

Fans in the LA area this Saturday (April 11) can buy tickets through the eventbrite.com, which offers the following tiers:

The idea of having fans invest in good music that does not generally get airplay on mainstream radio makes both business and artistic sense as longtime listeners of Doe and Sobule’s work can not only see the creative process closely, but also take the position of art patrons who would contribute high quality music to the public by their own choice and not have such creativity be forced to bend at the behest of a record label executive. With the growing number of musicians (especially from the classic alternative era) gravitating toward independent distribution and niche record companies and the effects of the current global recession in effect, it is ideas like this that will soon become a trend rather than an oddity.