Gorevette To Tour Japan This Week

Gorevette, the band combining the musical styles of Nikki Corvette (Nikki and the Corvettes) and Amy Gore (The Gore Gore Girls) will be flying to Japan for their first Far East tour together.

Nikki Corvette is already extremely popular in Japan, as she completed two successful runs there with her mid-2000s band, The Stingrays. After Gorevette’s March 24th Highline Ballroom set, Nikki told me how amazing her trips to Japan were, where it was a veritable Nikki-fest among Japanese fans who sang along the the words to her Nikki and the Corvettes songs as she played to full houses. Nikki Corvette’s sound has been a longtime influence on many of the great J-pop bands, like the 5678s and The Dazes, in addition to the many lady rockers of the U.S. 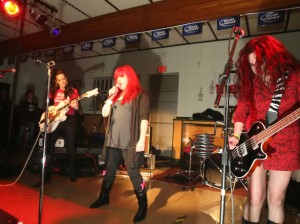 Now, Gorevette brings its new sound to the Eastern haven for classic punk and alt-pop. The unique combination of Corvette, Gore, bassist Lianna Castillo and drummer Al King is poised to take no prisoners as they rock Japan harder than Saduharu Oh could hit a baseball in his prime.

Gorevette fans in the U.S. can stay up to date with Corvette, Gore, Castillo and King on their special Japan Tour Facebook page.