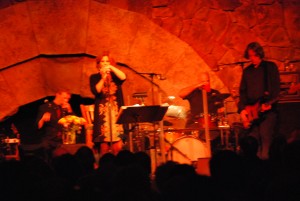 The Cowboy Junkies recorded their 1988 breakthrough album, The Trinity Session, on a minuscule budget and with one microphone inside an historic Toronto church. It is likely they did not at the time realize it would catapult them to having a following across the US and their native Canada that would travel with them for the next 23 years and beyond. Now and still together, the band continues to tour and record new music. On Saturday May 8th, they took the pilgrimage to the original Woodstock concert site at the Bethel Woods Center for the Arts and played in front of a sold-out crowd at its museum stage. 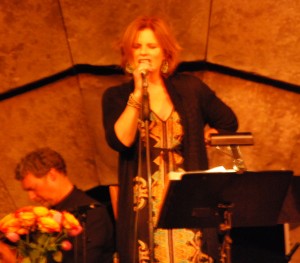 Bassist Alan Anton said to me in our on-air conversation a few weeks ago on Revenge of the 80s that one of the most special attributes of a Cowboy Junkies concert tour is that they do not play the same song list at every venue; people can watch them one night and visit a nearby city the next evening to be treated to a completely different show. The group, which consists of Anton, Michael Timmins (guitar), Margo Timmins (vocals) and Peter Timmins (Drums), likes to change things up and will choose from a variety of nearly 200 songs spanning from the mid-1980s through their newest album, Renmin Park.

After a solid and quite clever opening act, fellow Canadians Lee Harvey Osmond, The Cowboy Junkies took to the stage in the somewhat intimate setting of the Bethel Woods Art Center’s Events Gallery. Margo Timmins spent much of the first few songs hidden behind her forearm while singing, rarely revealing her entire face until she started talking to the audience. Although she seemed a bit shy at first, the singer became quite warm with the crowd later on as she described the back-stories of some of the songs and opened up with her thoughts while reflecting on her own life. Clearly, Timmins’ actions on stage proved quite essential to add to the intended effect of the Cowboy Junkies’ music and stage presence. 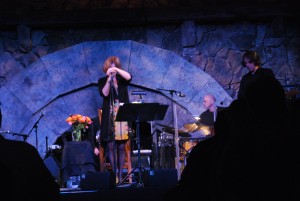 The Cowboy Junkies are not keen to use the stage and move around to excite their fans. Those who see them in concert come to hear the music while the band prefers to stay in one designated spot (uniquely, the guitar player sits) to enhance the effect of their songs. Margo Timmins chooses instead to concentrate on conveying the emotions of the people whose stories she tells through her gentle voice and subtly convincing style as she lets the audience feel the sorrow she projects. Like in the Cowboy Junkies studio recordings, Anton’s masterful mellow blues approach on the bass reinforces the emotive manner of Michael Timmins’ lyrics. Timmins also smoothly transitions skillfully on guitar from a jazzy lounge style to country-folk to heavy blues while also aiding his sister in the storytelling through the strings. Peter Timmins sets the tone solidly on the drums and guest multi-instrumentalist Jeff Bird adds some versatle depth to the well-accomplished quartet. One would conclude that any emphasis on stage movements and choreography would actually take away from the true impact of the Cowboy Junkies’ music and their live shows. 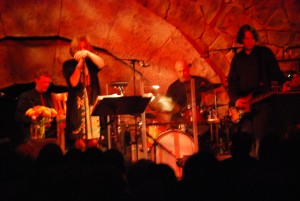 While the Cowboy Junkies rarely played their 80s-era songs in the show, The group revealed some of the tracks from their new Renmin Park album. The Timmins siblings and Anton plan to create three more LPs in the next 18 months and plan to blog about it on their official website.

Seeing the Cowboy Junkies in concert is best in a somewhat intimate setting similar to that at Bethel Woods primarily due to the way Margo Timmins gradually connects with the audience during and between songs as well as the above-mentioned ability of the band as a whole to impact their emotions as they sit and listen. It was a splendidly performed set in a perfect venue for the quartet.