Peter Case to Show Off His “Wig” Soon 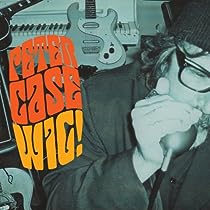 2010 is shaping to be a fruitful year for fans of The Nerves as two of the pioneering power pop band’s founding members will have new albums. You heard about the upcoming King of Power Pop from Paul Collins during our May interview on this show. Now — only a year after open-heart surgery — Peter Case is set to release his brand new album from Yep Roc Records, Wig.

Case’s story is quite inspirational as he recovered from heart surgery and a massive bill due to his not having health insurance. Several musician friends put together a benefit concert and drive to defray the costs.

Now, healthy, Case returns to the form that brought us his work from The Nerves and The Plimsouls as well as outstanding solo efforts over the years. Wig also features the work of X drummer D.J. Bonebrake (probably the best name in music history) and Gasoline Silver‘s Ron Franklin.

You can pre-order Wig at our Revenge of the 80s Amazon Store.