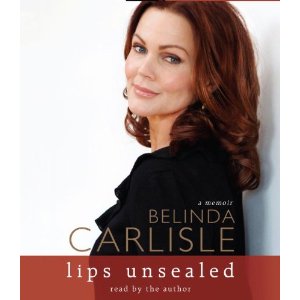 Belinda Carlisle transformed herself from one of new wave’s breakthrough artists to pop princess in the 1980s. While the fans saw a smiling, cheerful lady with a glowing face in a shimmering dress, the former Go-Go reveals in her memoir, Lips Unsealed, that the fantasy exterior only veiled a life of battles with weight, former band members and addiction.

Carlisle chronicles her life’s troubles starting from her childhood, where the reader learns of her father’s anger issues and the plight of her mother, caught in a loveless marriage to a much older man. Addiction also entered her life at an early age, having an alcoholic stepfather and a mother who succumbed to depression. Amongst her peers, she was often teased because of her weight, which she would carry on for years into her adulthood. While she had her happy moments, young Belinda’s experiences as a girl shaped, but did not prepare her for, what was to come.

One thing that Carlisle had going for her when getting into the L.A. punk scene was determination. Her ambition was to be a rock star, and it happened when she hooked up with the talented women who would make up the Go Gos. After the band broke up, the next stop was pop stardom for Carlisle.

Fans knew little of the demons that Carlisle explains in Lips Unsealed. She describes the challenges with her weight problem and how her obsession with staying thin led her to binges and serious mental stress. Carlisle reflects on the press’ constant obsession with her weight loss from the early days, which even took attention away from the Go Go’s reunion tours. She recalls, as best she could, the vicious spats she had with her band mates and her guilt over her success as compared to her former comrades. The reader will learn that Carlisle, while proud of her achievements, was hurting inside.

Ultimately, with Lips Unsealed, Belinda Carlisle brings to the reader the inner thoughts of a woman who hid a longtime cocaine addiction from her fans, her loving husband and herself. We learn of how it all started, then escalated into the drug having near total control of her. Carlisle did not take a self-righteous tack like other former addict-stars and refused to hide the fact that she greatly enjoyed cocaine and the feelings associated with its use. She portrayed all the fun and glamor of a sensational Hollywood movie on one end, but also did not leave out the details of the aftermath, which included sickness, sorrow and betraying the trust of her husband, who desperately wanted her to quit. Carlisle conveys her thoughts when they bounced from wanting to stop to being unable to resist temptation until she finally reached her epiphany as she hit her allocated “rock bottom” with coke.

Lips Unsealed stands out not only for the story and Carlisle’s harsh treatment of herself, but the head Go Go’s steering away from the gushing end where stars say they have “no regrets” or the other end of the extreme where one would claim the need to serve constant penance for his or her actions. Carlisle openly admits her faults and what cocaine was doing to her family, but admitted there was a certain joy to her highs, albeit temporary. She did not use her book to attack fellow band members and she reflected on criticism of her work that she once thought was unfair. With Lips Unsealed, Carlisle tells her story frankly without trying to seek pity from readers, which would have taken away from quite an intriguing life story.