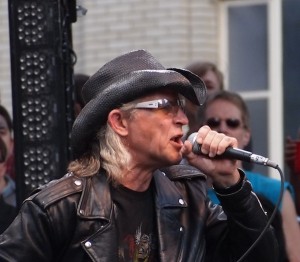 Men Without Hats will be touring the US in 2011. Lead singer Ivan Doroschuck and the band released their official tour dates earlier today. Many of those dates, they will share the bill with The Human League. The B-52s will be joining them for a few shows as well. This news comes shortly after Doroschuk announced at the 2011 North By Northwest Festival Men Without Hats is planning to relase a new studio album.

Men Without Hats became international stars with their chartbuster ‘The Safety Dance” in 1983. While only hitting the Top 40 once more after their breakthrough smash, the band developed a strong following thrughout North America. Their last CD was 2003’s No Hats Beyond This Point. This will be Men Without Hats’ first full-length US tour in several years; they were slated to be on the 2009 Regeneration Tour, but a legal issue forced them to back out with Ivan Doroschuck issuing a sincere apology to fans for not participating.

The full list of tour dates is on our on Examiner.com Men Without Hats announce US tour dates – National Alternative Music | Examiner.com http://www.examiner.com/alternative-music-in-national/men-without-hats-announce-us-tour-dates#ixzz1SnP1MdHj