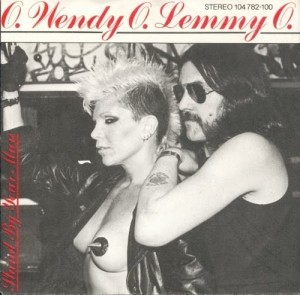 Our Revenge of the 80s Radio show is counting down the Top 50 Classic Alternative Cover Songs. The explanation and criteria can be found here in part one of our series. Here are #s 21-30:

After a rather superb collaboration with the band Girlschool, Lemmy and the guys from Motorhead contacted The Plasmatics to do some work together. The result was an EP featuring Lemmy and Wendy O. WIlliams covering the gentle easy-listening country song “Stand By Your Man.” The cult hit did not, however, some without some in-studio turmoil: It reportedly took some time to get Williams’ vocal track down perfectly and Motorhead guitarist Eddie Clarke (who was producing the track at the time) quit the band in the middle of the recording session. producers Rod Swenson and Dan Hartman took over to finish the three-track EP, which included each band covering one of the other group’s songs. After Williams’ suicide, Motorhead dedicated a track from their 1999 live album, Everything Louder than Everything Else, to her. Lemmy continues to be a revered figure amongst rockers and has cameoed in several video. Butt-Head was right when he said: “He’s Lemmy. He can walk into any damn video he wants!”

This track was already considered on the cutting edge when Norman Greenbaum recorded it in 1969. He used heavy guitars with some tambourines, hand clapping and a gospel trio to give it a standout sound amongst the more mellow hits of the time. Fast Forward to 1986, when a UK band that was formed on a five pound bet made it their breakthrough hit. Doctor and the Medics earned heavy airplay on MTV that year, partially on the song’s merits and partially on the colorful video with th 8′ 8″ Doctor wearing heels and climbing up imaginary ladders. Currently The Doctor is playing gigs with his most recent Medics lineup and will be celebrating the group’s 30th anniversary in 2012.