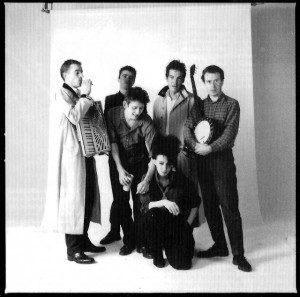 The classic alternative universe may have more representation in the Rock and Roll Hall of Fame, depending on who gets nominated for induction in 2012. Among the nominees are longtime college radio favorites The Cure and progressive rockers Red Hot Chili Peppers; the rest of the list includes Donovan, War, Joan Jett and the Blackhearts, Heart, Laura Nyro and The Beastie Boys.

Looking at the list of those already inducted into the Hall and without pointing at any selections in particular, some of the most influential punk and alternative rockers of the 70s and 80s continue to be snubbed by the Rock and Roll Hall of Fame Foundationâ€™s nominating committee. Whether they have been slighted for political reasons, matters of taste or simply not on the selectorsâ€™ radars at the time of discussion, here are five standout artists who deserve to be enshrined but continue to be ignored:

It took fellow Detroit punk pioneers The Stooges fifteen years and eight nominations before they finally became Hall of Famers in 2010, but MC5 is still not under consideration. The band, formed in 1964, was doing the anti-establishment, angry politics, rile-up-the-youth act years before Richard Branson signed HOFers the Sex Pistols to their short-lived rise to power. Despite the nominating committeeâ€™s apparent disregard for the groupâ€™s importance to music history and the development of punk, MC5 remains one of the Detroit music sceneâ€™s most revered bands.

Continue reading on Examiner.com Five classic alternative artists who should be in the Rock and Roll Hall of Fame – National Alternative Music | Examiner.com

On the other side of MC5 are the electro-new wave stylings of Depeche Mode. They were considered one of the English-speaking worldâ€™s prominent alternative/synth-rock/techno/dance crossover bands. Their track â€œJust Canâ€™t Get Enoughâ€ is considered a classic by hard-core fans of new wave, rock and dance. It was memorable enough for Rhino Records to name a whole new wave CD collection after it. They embellished simple melodies with a complex sound while establishing themselves as musicâ€™s de-facto standard of keyboard-oriented excellence.

The Pogues achieved international success with their own blend of traditional Irish folk and rock. Shane MacGowan and his crew of outstanding musicians produced a wide range of songs: many described tales of woe and struggle, others were rousing drinking anthems, and some were captivating ballads as only the gruff-sounding MacGowan could convey them. Their â€œFairytale of New Yorkâ€ (with the late Kirsty McColl) has joined the ranks of immortal Christmas songs, and it is tradition for their biggest fans to catch The Pogues on each of their several â€œfinalâ€ U.S. late winter/early spring tours. Plus, MacGowan is constantly either spearheading or prominently participating in charitable efforts by he and his fellow U.K. musicians.

John Doe, Exene Cervenka, Billy Zoom and D.J. Bonebrake not only had arguably the most colorful names in music, but they were a driving and influential force in the Los Angeles punk scene. They blended elements of Americana, folk, rockabilly and new wave to form their signature sound. Doeâ€™s bass is recognizable in all of his musical contributions, including his playing for Mojo Nixonâ€™s Otis album. Plus, who doesnâ€™t thin about their version of â€œWild Thingâ€ when thinking of Charlie Sheen in the first two Major League movies? It should also be noted here that Cervenka was listed as one of rockâ€™s most influential women by VH-1.

Anyone who can get an entire world of musicians together for one day for a charity and get virtually every other human being on board in one way of another at the same time deserves to be in the Rock and Roll Hall of Fame. Geldof did that in 1985 when he organized Live Aid, which came out of his 1984 Christmas charity song, â€œDo They Know Itâ€™s Christmas.â€ Geldof and his Boomtown Rats are also known for their iconic (and banned in some parts) song â€œI Donâ€™t Like Mondays,â€ inspired by the Brenda Spencer shooting. The Boomtown Rats, as a band, had the uncanny ability to tell stories ranging from the trials of hopeless youth to spy adventures to a suicidal debutante and make them enjoyable enough to enjoy a few ales with or sing along to.

To be nominated, n act must have released its first single or album 25 years ago to qualify for induction. More than 500 voters will determine who makes the hall. New members will be inducted at a ceremony at the hall of fame in Cleveland on April 14.

There are arguments that can be made for a number of others, plus fan-based efforts to get Kevin Rowland and Fishbone inducted, but the above are standout acts that should at least be given proper consideration to be included in the Rock and Roll Hall of Fame.